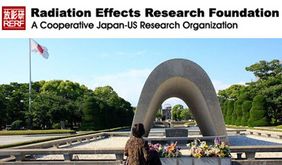 The fifth meeting of the Scientific and Ethics Committee for the Clinical Study of the F1 Offspring of A-bomb Survivors was held in the Hiroshima RERF Auditorium starting at 14:00, on May 14, 2015. The meeting included an explanation of the progress being made in the Longitudinal Clinical Study of the F1 Offspring of A-bomb Survivors (the so-called “second cycle”), which was initiated in November 2010, following the initial Health Effects Study of the Children of A-bomb Survivors, conducted from 2000 through 2006 (the first cycle). During the second cycle’s four-year duration, it was reported that about 10,000 participants underwent health examinations, nearly meeting the targeted 80% participation rate, and that the study is steadily moving ahead toward initiation of its third cycle. Next, there was a report on the results of preliminary calculations regarding the participants in the first three years of the second-cycle of the Longitudinal Clinical Study of the F1 Offspring of A-bomb Survivors. Discussions took place on reports of review results and statistical analysis plans regarding the prevalence and incidence of multifactorial diseases, such as hypertension, hyper-LDL cholesterolemia, diabetes, angina, myocardial infarction, and stroke, as well as comparisons of lifestyles and disease prevalences between those who participated in the second cycle and those who did not, based on information obtained at the time of the study’s first cycle. From the participation situation to date, it appears as if the vast majority of those eligible for the second cycle of the study will have undergone health examinations by the end of October 2015. The calculations at this point included these participants projected to undergo examinations within that timeframe, and more detailed review of statistical analysis plans henceforth is scheduled for some time in the future.